It goes without saying that this is the golden age for the video game industry. Although the competition of the gaming industry has been intense, the quality of video games is only getting better.

To get prepared for a new season of video games, there are five carefully selected games from a wide variety of genres which come from the classics to the newly emerged.

The story of Super Mario is perhaps the most enduring one. As an all-time classic, the character of this Italian plumber has been adapting through the changes of different eras of the gaming industry.

Since Super Mario 64, the third dimension of this story in 1996, the developer has been successfully molding Super Mario into an iconic character with different tricks.

Although this new spiritual sequel does not have ground-breaking updates for the character, Mario’s new buddy Cappy allows Mario to take over of a range of monsters and let him harness the power in the world of Odyssey.

The Legend of Zelda: Breath of the Wild

The Legend of Zelda is a depiction of Nintendo’s long-lasting legacy in the gaming industry. As comparable as Super Mario’s enduring character, Zelda also travels through time with more than three decades of history as a flagship game of Nintendo.

The magical evolution of Zelda comes into play in the Breath of the Wild, it has a sense of radical reinvention of the game’s history, making the spirit of discovery and adventure Zelda well and alive.

Zelda’s lively sense of childlike wonder was also well-captured throughout the game, enriching the game in the midst of this open-world age.

Without a good foundation of the gaming history, it is also possible to create a new era for a new game that has no solid base of audience like Super Mario and the Legend of Zelda do.

As one of the PlayStation 4-only releases last year, this game stands out with a backdrop of a post-apocalyptic world which features a strong and rough female protagonist who outsmarts mechanical creatures and conquers them.

The hit of Japanese anime Kimi No Na Wa (Your Name) assembles the imagination of high school life in Japan. In the context of Persona 5, it is all about a gateway for players to synchronize themselves with the life of a Tokyo high school student, encountering the psyches of Japanese teenagers with more than 100 hours of gameplay.

This is an action-based video game that features a post-apocalyptic war with humans who use androids to fight against machines created by aliens, incorporating with touching moments and a bunch of twists and turns.

What makes it unique is the unusual portrayal of fanfare with a Japanese visionary, making it an outstanding game on a Galaxian-style shooter from a third-person perspective.

Whilst living in this golden age of gaming industry, the above examples have shown that nowadays it is rather complicated to evaluate the quality of a game since there are decade-long game characters which managed to adopt and survive in the competition. 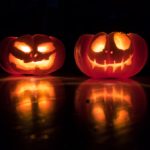 5 Easy Costumes For Halloween Using Clothes You Already Have