The Super Bowl Halftime show has seen some of the most spectacular performances by some true legends of music entertainment. During the 70s and the 80s the idea was just to put on a good musical band to entertain the crowds and then as the 90s approached the heat got turned up on this 15 minute slot and we saw some of the greatest music artists of all time grace the stage. Michael Jackson, Prince, The Rolling Stone, The Who, Diana Ross, Beyonce, Bruce Springsteen and U2 have all played this show and they all helped to elevate the status of this stage for years to come. Unfortunately however, this hasn’t continued and the show has become a mish-mash of semi-relevant artists who use this stage to sell an album or maintain their relevance. My buddy DJ Rama and I used to adore this show, but we believe that its legendary status may be in jeopardy.

The first point to make here is that as the years go by there are less and less legends around to play a show such as this. If you look at the likes of Paul McCartney and the Rolling Stones, we just aren’t making legends like this any more, given that we are in an era of so much music and such a disposable attitude towards it. There are bands which could of course play this concert well, in fact Maroon 5 were good last year, but they are nowhere near in the category of the other legends we’ve mentioned and their show will not be remembered trough the annals of time in the same way we will with Prince and Jackson.

When we have to throw together multiple artists to create a show we know that we are in trouble. There is of course nothing wrong with a surprise here and there and an artist featuring with another, like Bruno Mars inviting the Red Hot Chili Peppers to perform with him, but the show should always be about an artist with a possible feature, rather than a wide collection of artists performing a show with no continuity.

We know that in reality the whole event of the Super Bowl is about making money and making it as popular as possible so that they can sell every commercial they possibly can. The half time show serves this purpose too as the organizers don’t want you taking a break and switching off, they want you tuned in to the whole experience. Unfortunately that results in watered down acts and performances with flavor-of-the-month music artists and a serious lack of synergy.

DJ Rama and I believe that this slot is in fact dead, and next year’s appearance of Shakira and Jennifer Lopez may very well be the final nail in the coffin, great artists and true legends, but not for a situation like this. Better to go back to the marching bands. 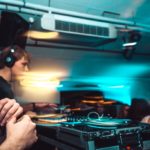 DJ Rama – Want to be a DJ? Here’s How to Get Started