Roger Wolfson is a TV writer who sailed over 20,000 miles aboard his sailboat.  This is a story of when he sailed closest to the town in which he was raised.

Roger Wolfson is from Connecticut.  But he never knew that Connecticut was a beautiful state until he started sailing along its coast.

Sailing his 42’ Jeanneau Lagoon Catamaran “Kinship” has now taken him to a bunch of cities he once only saw as places with restaurants easily accessed from i-95: Greenwich, Stamford, Norwalk, Milford, Old Saybrook, East Haddam.  From the highway, these are relatively dull looking towns chock full of traffic and industry, congestion.

From the sea, they are almost unspeakably beautiful.

His first stop was Greenwich, and (thanks to Primedia’s wonderful “Northern Waterway Guide”) he knew to anchor carefully between two lush little islands called the Calf Islands.  Roger Wolfson never even knew islands existed off the coast of Connecticut — and certainly not such lovely, pristine mounds of tall trees, stretching grasses, and wandering beach.

With his friend Lana, Roger took the tender (his ten-foot boat he utilizes to get to shore when Kinship lies at anchor), glided between two cliffs of stone, and found a marina that looked like something from the Mediterranean.  Roger called his Parents in New Haven and they drove down for dinner.  Roger was so excited to show them his boat nuzzled in between the islands that he and his parents drove around for a half hour trying to get a view of the boat.  But at the end of every road was another mansion.  They couldn’t get near the water.

Oh, Greenwich.  The people of Greenwich can’t even see the sea – only the wealthy, who Roger Wolfson can attest, are rarely even home.  That night, lights lit perhaps every fourth mansion.  Weekend houses.

In tremendous contrast is the town of Milford, next door to Roger’s hometown of New Haven.  He thought he knew Milford pretty well.  In High School, Roger delivered pizzas here.  Now he was quite aware that he knew nothing about Milford.

Soon he was anchored next to Charles Island, a round, dense, magical looking island about three hundred yards from the beach, nestled comfortably in the elbow of Milford Harbor.

Residents of Milford surround the Island.  At least three dozen boats – sailboats, powerboats, sunfishes, kayaks, and hobie cats – lay at anchor or circle within a handshake of Kinship.  Milfordians basked in the sun on their bleached white boats, dove off their bows, fished from the deck, or “rafted” their boats together and barbecued.  Many of these boats stayed there all night, turned on their anchor lights, and slept under the stars.  This is very rare – in fact, this was the only city he visited on the East Coast where Roger had any company at all at night.

Perhaps the most wonderful feature of Milford is what lies between the Island and shore.  At one point, Roger jumped into the tender to head into town for a bike ride. As he made his way to shore, he saw a hundred yards out to sea, a man, standing on the water, fishing.  Somehow he seemed to levitate, right there, in the middle of the bay, water all around.

He flummoxed Roger: the moment seemed miraculous.  But soon Roger saw families, literally dozens of families, traipsing from shore out into the abyss, yet remaining mysteriously afloat.  They made their way like families of ducks in a perfect line all the way out to the island.  There they explored, played, swam; and waded back to land.

At low tide, the wonderful sand bar stretching perfectly from island to shore is visible.  At high tide the water reclaims it, but and at sunset, the two shades of water, distinctly different on either side of the bar, glistening in complementary variations of purple and red, hint of the sandbar’s eventual return.

At sunset it seemed they were joined by the entire blessed town of Milford, by sea and land, as they watched the sun delicately lay to rest directly on top of the town, kissing it gently goodnight. 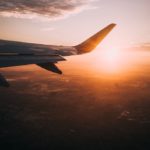 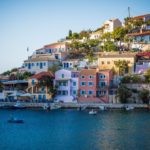 Victor Restis: Charitable Contributions for the SOS Villages of Greece